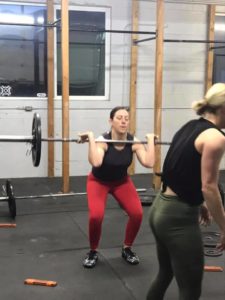 REMINDER
Sweat Classes will be held on Tuesday @ 4pm and Thursday @ 7pm. Bring a friend and come try it out! 5$ drop in!
It’s a new month, we need new goals on the goal board!

Today we get a mixture of an old classic crossfit workout. Now this may not be a “benchmark” but if you ever met a crossfitter who’s done this since like 2008-2011 or so then they probably know who the “Nasty Girls” are. For most people they say that this was the first video they actually watched that inspired them to do crossfit. Pretty crazy, today we get a taste of it with just a little mixture to it.

Watch the video below and get some history about where crossfit came from. This was some OG stuff and what made crossfit so great. All 3 of these ladies (Annie, Nicole, Eva T) all have benchmarks named after them, they were the “firebreathers” back in the day. So pretty cool video to watch.

I also heard a story that none of these ladies new they were doing this workout. They showed up and were told they were going to try a workout and be filmed for it. If that isn’t crazy enough, none of these women had ever done a muscle up in a workout. They just would practice muscle ups as skill work, but never in a metcon. Then to bust out 21 of them, and basically strict is pretty crazy!!