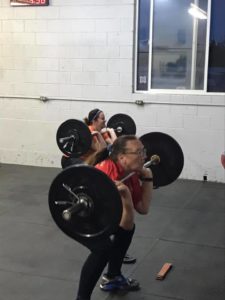 REMINDER
Sweat Classes will be held on Tuesday @ 4pm and Thursday @ 7pm. Bring a friend and come try it out! 5$ drop in!
It’s a new month, we need new goals on the goal board!
Signing up for the Fair Fundraiser is live! To sign up click here!
Bring a Friend day is Thursday! All classes are free!!
This Saturday we are meeting at the track at 8:15 AM. Hope to see you there!

On the Safety and Efficacy of Overhead Lifting

The overhead press is an important component of upper-body training for several sports, and it is one of the oldest weight-room exercises. It has been used for years as a primary exercise for shoulder strength and rehabilitation because of its balance of anterior/ posterior muscle involvement. In contrast to the bench press, which is an inherently anterior-dominant movement, the press locks the weight out overhead to recruit all the musculature on both the front and back of the shoulder. This provides a superior strength stimulus for all the muscles involved in stabilizing the shoulder girdle and handling loads that must be moved through an overhead range of motion. In addition to being functionally necessary, training overhead work capacity is above all safe. In fact, failing to prepare for the rigors of ordinary overhead movement can predispose the shoulder to mechanical dysfunction. The Ammo Lift is a functional version of overhead pressing that uses a common military object and, when done in the form of a max-reps timed test, assesses muscular endurance in a practical, easily administered, easily instructed, and easily assessed manner. 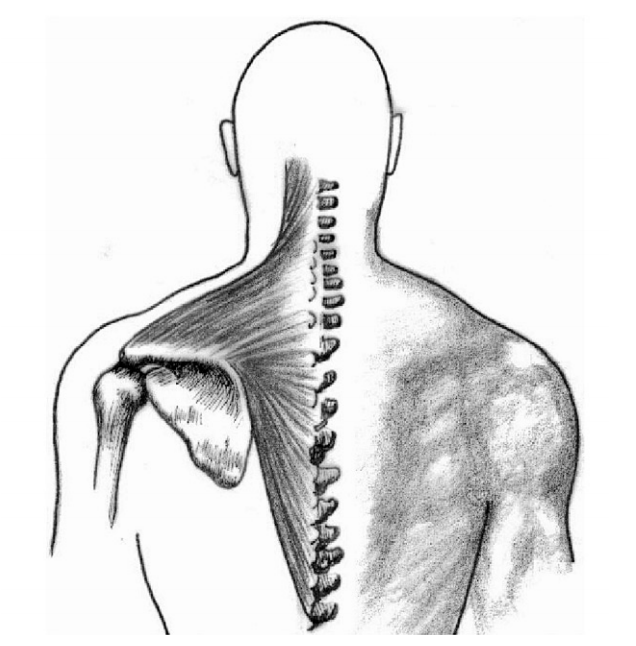 Figure 1: The trapezius muscle attaches the spine, from the top of the neck down to the lower back, to the scapula. The shoulder essentially hangs from the spine by the trapezius.

An anatomical analysis of the movement reveals several important things. First, the anatomy of the shoulder lends itself best to pressing overhead when the trapezius is engaged at the top of the press. This is because the shoulder blades (the scapula, plural scapulae) support the weight overhead—because the arm bones—the humerus, ulna, and radius—articulate with the scapula, and line up under the load when the arms are locked out. This column of bones is held in place by the muscles of the arms and shoulders, and the weight is transferred down the arms to the scapulae, which hang from the spine by the trapezius muscles. These large muscles originate along the spine from the upper neck vertebrae all the way down to the upper part of the lower back. Their broad origin attaches to the spine of the scapula, the bony ridge along the top of this otherwise flat bone, clearly visible in figure 1 and figures 3c through 3e. What the arms support, either overhead or hanging from the shoulders, the trapezius supports. “Trap” strength is therefore an important component of shoulder stability.

Figure 2: The skeletal/load relationships in overhead lifting. The load, the bones of the arm, the scapula and the mid-foot are vertically aligned when the system is in balance.

The traps supporting the scapulae, along with the deltoids working on the humerus and the triceps locking out the elbow, hold the load overhead. The proper alignment for the load and the skeleton is a vertical relationship between the load, the scapulae, and the midfoot (figure 2). Support in this overhead position is best provided when the trapezius is actively contracted, producing a “shrug” of the shoulders as the load is locked out by the elbows. This active trapezius contraction results in support of the load by all the component musculature, and it also serves to better place the scapulae directly under the load in the correct vertical relationship. It is for this reason that the instructions for performing overhead pressing should include the cue to “shrug your shoulders at the top,” or to “shrug up into the load,” or any other cue that will elicit this active trapezius contraction.

The scapula is rotated up and out of the way by the trapezius contraction, and this rotation is made possible by the activity of the serratus anterior. The serratus attaches to the medial (toward the center of the body) border of the scapula and wraps around the ribcage to attach in front at several places on the ribs under the chest muscles. It pulls the scapula forward around the ribcage; when the shoulder is shrugged forward, the serratus are working, and when the shoulder is shrugged either back or up, the trapezius is working. The serratus anchors the lower aspect of the scapula so that when the traps pull the top of the bone upward and medial, the serratus pulls the bottom of the bone down and lateral, and the acromion process rotates back toward the neck, away from the humerus as it comes up overhead. This preserves the space between the humerus and acromion. The shrug at the top of the press and a strong serratus act together to avoid shoulder impingement in healthy shoulders.

3c. The spatial relationship between the acromion process and the head of the humerus. 3d. This space closes with an improper overhead movement, and can cause problems with impingement. 3e. The proper space is maintained when the relationship between the scapula and the humerus is protected by the trapezius contraction—the “shrug”—which rotates the top of the scapula up and towards the center, and the serratus anterior, which pulls the bottom of the scapula down and away from the center.

The Ammo Lift is performed with a 5.56-mm ammo can loaded to thirty pounds. The hands support the can with the palms facing each other and the elbows under the load (fig.4). The can is lifted overhead, keeping the load as close as possible to the face for efficiency of leverage and force transfer. The lockout position is overhead, with straight elbows and shrugged shoulders (figure 5). The use of leg drive is allowed and encouraged, since this represents an increase in the total output of the movement and a more powerful way to lift more weight. Incorrect lockout (i.e., not overhead, and shoulders not actively shrugged) may occur, as shown in figure 6; correct instruction in the form of simple cue to “shrug the shoulders at the top” and/or “over your ears” will eliminate most of the tendency for this error.